Hydropower energy is the energy that is derived from the moving water from high altitude to lower altitude. It is the renewable source of energy contained in the water used to generate electricity. The energy is produced from water using the gravitational force when water falls from height. It is predictable, mature and cost-effective technology. The conversion efficiency of this energy resource is about 90%, which is the best among all energy resources. The investment is high, but the maintenance cost is low along with a long life span. This energy resource has played a significant role in social and economic development in the past through water and energy services. It also helps mitigate water scarcity by providing fresh water for drinking, irrigation purposes and flood control. After the generation of electricity without consuming the water, that water is available for other ethical use. Hydropower energy generation can occur on a large, medium, and small scale. A small scale is used for rural electrification. In India, the first hydropower plant of 130KW was installed in Sidrapong (Darjeeling) in 1897. Some other power plants were Shivasamundram in Mysore (2000 kW), Pullivasal (400 kW) in 1910 Chhaba (1750 kW) in Shimla in 1913. These are installed for lighting purposes.

Capacity and Potential Of Hydropower

The head loss in a hydropower plant is the energy loss that occurs in the water conductor system during the diverting of the water to the turbine. The friction loss in hydropower is dependent on the water velocity and the roughness of pipeline, penstock and tunnels through which water is moved. Hydraulic loss occurs when water moves through the channel from the reservoir to the turbine via valves and pipelines.

Such losses can be minimised as hydraulic losses decrease by increasing the reservoir capacity or the turbine capacity. Head loss is minimized by raising the tailrace and headrace area.

Different type of turbine has a different profile for efficiency when the discharge of the turbine diverge from the optimal value.

The potential of hydropower energy production is defined by the given parameters that are dependent on topography, hydrology, and power plant design:

The potential of Hydropower is estimated by using the equation:

Where Q Discharge in m3 /s

η- Overall efficiency of turbine, generator and gear-box (may be taken as 75% initially)

India’s hydropower potential is estimated at about 148,701MW. 92.5% of hydroelectric power production is accounted for by the public sector. Public sector companies for hydropower are as follows:-

In this type of hydropower plant, the electricity is generated by diverting the available water from the stream. The segment of water from the river deviates from the mainstream to a pipeline, and that leads to the turbine that is connected to the generator. Such power plants use short-term storage (hourly, daily and weekly) by adapting the demand profile. This type of power plant is cheap and shows little or minor environmental impact.

This type of hydropower plant uses a water storage system to reduce its dependency on variable inflow. The big reservoir is used to store the water, control the water flow, and use it effectively to generate power by releasing the water on the turbine. This is the most common type of hydropower plant used around the world. Such plants are used as peak load or baseload as per need. This type of power plant install in the river valley and use the water for irrigation. Drinking and flood control.

This type of hydropower plant pumps the water up the storage basin using surplus electricity, which is generated by the baseload power plant and reserves the flow to produce power during the daily peak period. It is one of the most efficient methods available for energy storage. Surplus energy is generated from other resources like wind or solar energy. 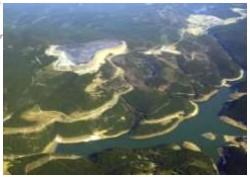 One of the most intensively used renewable energy resources is hydropower throughout the world. Its larger portion is acquired by China, which is 370.2GW and acted as a world leader, the USA is second, accounting for 102 GW and Canada is third with 82GW. India is placed in the fifth position(50.5), overtaking japan, whose installed capacity is 50GW. Countries that show the highest increase in hydropower in Brazil (4.92GW), China (4.17GW) and then Laos (1.89GW) in 2020. Hydropower plants play a crucial role in energy and economic development and reduce the burden of fossil fuel-based power generation, helping to mitigate environmental change caused by fossil fuel use. The impact of hydropower depends on size, type and local conditions. It is a clean energy resource and conserves fossil fuels. It is based on the water cycle to generate power, and that water cycle is regulated by solar energy and is renewable. It provides water supply and control flood and also offers recreational activity like boating, fishing and swimming. Apart from positive impacts, some negative impacts also occur like hydrological balance, drainage problems, soil erosion, and hilly hydropower prone to seismic activity (Tehri dam). Eutrophication and change in surface water quality, alteration of natural flow, change the biodiversity and ecosystem imbalance. Population displacement during the Sardar Sarovar dam. Poor compensation to displaced population, rehabilitation and resettlement problems.