Natural risks are classed as geological hazards based on their causes. Geological catastrophes are natural disasters induced by geological processes, such as earthquakes, volcanic eruptions, tsunamis, and landslides.

Mountains and high ground cover around 20% of the area, while mountain dwellers account for about 10% of the world’s population. Natural catastrophes are widespread in the mountains because of large changes in height and high gravitational energy potential, and the crucial function of water in both liquid and solid phases.

There are three basic reasons why mountain landscapes are so dynamic.

Human activity, such as deforestation, extensive livestock grazing, road building, mining sector growth, and so on, exacerbates the dynamism of mountain landscapes.

Human operations such as drilling in overpressured zones pose a substantial danger. Therefore, better knowledge of geohazards, their preconditions, causes, and implications is essential for mitigation and prevention. In some circumstances, particularly in alpine locations, natural processes can trigger complicated catalytic events, such as an avalanche hitting a lake and triggering a debris flow with potentially hundreds of miles-wide ramifications or volcanism causing a lahar. An earthquake is a violent and sudden shaking of the earth’s crust produced by the movement of rocks deep under the surface of the earth. Earthquakes are many times one of the most dangerous natural disasters. Each year, there are around 100 earthquakes of sufficient magnitude to inflict significant damage. They strike without warning, and many earthquake zones on the planet overlap with densely populated regions.

Causes and Characteristics of Ground-Motion

Natural tectonic processes inside the earth’s crust create earthquakes, which are a worldwide phenomenon. They can be caused by the release of energy from the Earth’s stressed rock, tectonic movements, or volcanic activity. Tremors, often known as earthquakes, are caused by the abrupt release of stored energy or pressures in the ground or the quick movement of huge landmasses on the planet’s surface.

Seismic waves are created when energy held in the Earth’s crust is released unexpectedly, generally when layers of rock pushing against one another fracture and slide.

Tectonic plates – A tectonic plate (also referred to as a lithospheric plate) is a huge slab like a solid rock made up of oceanic and continental plates. The size of a plate can range from a few hundred kilometres to thousands of kilometres.

Epicentre – The epicentre of an earthquake is the point on the Earth’s surface right above where it occurs and spreads. Seismologists use it as a reference point when studying the distribution and impacts of earthquakes.

Faults – Between two blocks of rock, a fault or fracture is a break or zone. The blocks of these rocks can move relative to each other due to these faults. Large strain energy created by the earthquake travels through the Earth’s layers as seismic waves in all directions. These waves are reflected and refracted at each interface.

There are two kinds of seismic waves:

Magnitude – The amount or amplitude of seismic waves generated by an earthquake source and measured by seismographs is called earthquake magnitude. Because earthquakes vary greatly in magnitude, it is important to apply a mathematical method to compress the range of wave amplitudes reported on seismograms for comparison reasons.

Intensity – Seismic shaking varies greatly in intensity within a single impacted location. The strength of the shaking is generally estimated as earthquake intensity because the complete spectrum of observed impacts is not capable of simple quantitative characterisation.

The magnitude of an earthquake is a numerical representation of its size. The Richter scale and the Mercalli scale are the two basic scales used to measure earthquakes.

Richter Scale – The amplitude of the greatest seismic wave recorded during the earthquake is used to determine the Richter magnitude. The Richter scale ranges from one to ten, one being the smallest and ten being the most powerful.

The intensity of an earthquake is measured in Roman Capital Numerals, and it is a qualitative measure of the actual shaking at a site. There are numerous intensity scales to choose from.

The Modified Mercalli Intensity (MM) Scale and the Medvedev–Sponheuer–Karnik (MSK) Scale are two regularly utilized ones. Both measures are very similar, ranging from I (least perceptive) to XII (most perceptive) (most severe).

The intensity scales are based on three aspects of shaking: human and animal perception, building performance, and changes in the natural environment. Isoseismal, lines connecting places of equal seismic intensity are used to graphically depict the distribution of intensity at different locations during an earthquake. “Earthquakes don’t kill people; buildings do,” according to several seismologists. This is because the majority of earthquake deaths are caused by buildings or other human structures collapsing during the quake.

Earthquakes that strike in remote places far from human settlements rarely result in fatalities. As a result, the risk of an earthquake is determined by –

Earthquake hazards can be categorized into the following categories:

A volcano is basically a crack or opening in the earth’s crust through which magma (in the form of hot liquid or semi-liquid rock), gases, and volcanic ashes escape out. The volcanos are most commonly observed where tectonic plates collide or divide. Sometimes due to, volcanic hotspots, they also form in the midst of plates.

A volcanic eruption usually occurs to release lava and gas inside the earth’s crusts, sometimes explosively. A ‘glowing avalanche,’ which occurs when newly erupted lava slides down the flanks of a volcano, is the deadliest sort of eruption. These lavas have the ability to flow down rapidly and even reach temperatures of up to 1,200°F. Ashfall and lahars are two other dangers (mud or debris flows). Volcanoes frequently become the reason for the dislocation of human settlements.

There are nearly 1500 known volcanoes on the planet considered to be active. Volcanoes can discharge hot and toxic gases, lava, ash, and rock when they erupt. These cause catastrophic loss of life and property, especially in densely populated areas. Between 1998 and 2017, volcanic eruptions and wildfires impacted 6.2 million people and killed nearly 2400 people.

Volcanoes have a root zone that is 70 to 200 kilometres (40 – 120 miles) underneath the surface of the Earth. Temperatures are high enough in Earth’s upper mantle to melt rock and generate magma. Magma is generally less dense at these depths than the solid rocks surrounding and topping it. Thus, it rises to the surface due to gravity’s buoyant pull. 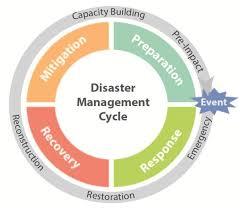 A landslide occurs when a mass of rock, rubble, or earth slides down a slope due to gravity. The materials may collapse, topple, slide, spread, or flow as they move.

Landslides don’t happen due to a specific reason but due to a combination of factors. Movement of slopes generally occurs when the strength of the earth materials that bind the slope is exceeded by forces acting towards the downslope (mostly gravity). Heavy rainfall, melting of snow, changes in water level, river erosion, changes in groundwater, earthquakes, volcanic activity, human disturbance, or any combination of these causes can cause landslides.

Mudslides are a type of landslides that occur when water accumulates rapidly in the ground, causing a surge of water-soaked materials like rock, soil, and debris. Mudslides are frequently triggered by natural calamities and start on steep slopes. During and after heavy rains, areas where wildfires or human modification of the land have killed vegetation on slopes, are particularly prone to landslides.

Landslides are categorized according to the sort of movement (slides, flows, spreads, topples, or falls) and the type of material they are made of (rock, debris, or earth). Multiple types of movement can occur within a single landslide because the temporal and spatial interactions of these movements are typically complex. A comprehensive analysis of both landforms and geological segments, or cores, is often required for their examination.

Landslides are a recurring threat to life and livelihood in most parts of the globe, particularly in areas where population and economic expansion have been rapid.

Tsunamis are a sequence of massive waves caused by an undersea disturbance such as an earthquake, volcanic eruption, landslide, or meteorite.

Large underwater earthquakes at tectonic plate borders are commonly responsible for these magnificent waves. When the ocean bottom near a plate boundary abruptly rises or dips, it displaces the water above it, causing rolling waves to form, which eventually produce a tsunami.

The majority of tsunamis, roughly 80%, are happening along the Pacific Ocean’s “Ring of Fire”. This is a geologically active region, where tectonic movements frequently result in volcanoes and earthquakes.

When these waves leave their source location, they may be exceedingly hazardous and destructive when they reach the beach.

Tsunami waves resemble walls of water and can strike the beach for hours, with waves occurring every 5 to 60 minutes. The initial wave may not be the most powerful; instead, the second, third, fourth, and even later waves are frequently the most powerful.

After a strong wave engulfs or floods inland, it retreats back to the sea, often as far as the eye can see, exposing the seafloor. Within minutes, the following wave crashes ashore, bringing with it a slew of floating debris that had been swept away by earlier waves.

When waves approach harbours, they create highly strong and dangerous water currents that may easily break ship moorings, and when tsunamis strike rivers or other canal systems, bores that go far inland can occur.

Avalanches are quickly falling masses of snow, ice, and boulders down a mountainside. Due to their intensity and seeming unpredictability, they may be lethal.

Humans are responsible for 90% of avalanche disasters, with up to 40 deaths each year in North America. Trekkers, snowboarders, and snowmobilers make up the majority of the group.

When the debris on a slope breaks away from its surroundings, an avalanche is generated; this material swiftly accumulates and drags further material down the hill.

The interplay of high topography, meteorological conditions, snowpack conditions, and a trigger determines whether or not an avalanche occurs. Slab avalanches are most common on slopes between 30 and 50 degrees. On less steep slopes, the gravity force is inadequate to overcome frictional resistance and causes a snow slab to be displaced; on steeper slopes, snow tends to sluff off.

A big block of ice or a small glacier may break off a slope, accumulating snow and velocity before pouring down in a deadly steamroll. On Mount Everest, one of the deadliest avalanches happened when an ice mass the size of 657 buses fell on top of climbers, killing 16 Sherpas.