What is the Gaia Hypothesis?

The Gaia Hypothesis, also sometimes known as the Gaia theory, proposes that all living organisms interact with and integrate their inorganic surroundings to form a complex self-regulating system. This system maintains the conditions for life on Earth. To put it into plainly simple terms, in the words of Lenton (2002), “The Gaia theory proposes that the Earth system self-regulates in a habitable state.”

Investigators and those studying the Gaia hypothesis focus on how the evolution of life contributes to the stability of global temperature, oxygen, ocean salinity, and other factors that make the Earth habitable. The Chemist James Lovelock formulated the Gaia Hypothesis and Microbiologist Lynn Margulis co-developed it in the 1970s. Initially, the scientific community received this theory with hostility. But now, scientific disciplines like geophysiology and sciences that deal with Earth systems study it. Even fields like biogeochemistry have adopted the idea.

The Gaia Hypothesis suggests that the Earth is a complex self-regulating system. This earthly system includes the atmosphere, the biosphere, the hydrosphere, and the pedosphere. These spheres are tightly coupled as an evolving system. This system as a whole, called Gaia, sustains the chemical and physical environments optimal for life.

Biota unconsciously operates the Gaia system, which leads to the stability of habitability conditions in complete homeostasis. Homeostasis is a process by which an organism tends to maintain internal stability while adjusting to changes in environmental conditions. Most of the Earth’s surface functions depend on the interaction between living forms and inorganic elements. The interaction establishes a global control system regulating Earth’s surface temperature, ocean salinity, atmospheric composition, and other phenomena. 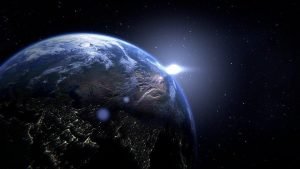 The Earth’s oceans have maintained a salinity of 3.4% for a very long time. It means that in 100 ml of ocean water, salts comprise 3.4 ml and that the oceans have sustained this proportion for a significant part of Earth’s history. Salinity stability in oceanic environments is essential since most marine species do not generally tolerate salinity values above 5%. The constancy of ocean salinity has been a mystery for a long time. Rivers contain salts and minerals in their water. All rivers flow into the ocean. Therefore, river water input should raise ocean salinity much more than what we’ve observed over the years. Some suggested that seawater circulation through hot basaltic rocks at mid-oceanic ridges may have strongly influenced salinity levels. However, the seawater composition is far from equilibrium. Many have found it hard to explain the constancy of ocean salinity without the influence of organic processes. They’ve hypothesized that the formation of salt plains by bacterial colonies that fix ions and heavy metals have an important role to play in regulating ocean salinity.

If you ignore anthropogenic emissions, atmospheric emissions have stayed fairly constant. The constancy provides ideal conditions for contemporary life. With the exception of noble gases, organisms produce or process all atmospheric gases. The Gaia hypothesis says that life keeps the Earth’s atmospheric composition at a steady state. Life requires oxygen at stable concentrations. Earth is the only comprehended planet to have air suitable for plants and animals.

Since life first appeared on the Earth, the sun’s energy has increased by 25% to 30%. However, again ignoring anthropogenic emissions, the Earth’s surface temperature has stayed within levels of habitability, regularly reaching highs and lows.

Snowball Earth, however, contradicts the Gaia hypothesis to an extent. Snowball Earth refers to back-to-back ice ages on the Earth due to raised oxygen concentrations and reduced methane levels. However, the ending of these ice ages due to bio-geophysical processes sits well with the Gaia Hypothesis.

Contradictions To The Gaia Hypothesis

Here, we’ll look at one of the most famous examples many scientists have used to refute the Gaia Hypothesis. It is global warming. Human activities have caused the release of enormous amounts of CO2 into the atmosphere. Biological uptakes of CO2, however, have slowed down the build-up of greenhouse gases in the atmosphere. Humans have increased carbon dioxide concentrations in the atmosphere from roughly 275 ppm during pre-industrial times to a current value of around 400 ppm. That’s an increase of roughly 45%. The best available estimates indicate that this atmospheric increase prompted the terrestrial biosphere to increase its carbon uptake by roughly 2 or 3 Pg C per year. Pg C means petagrams of carbon or 105 grams of carbon. 1 Pg C equals 1 gigatonne of carbon.

The average productivity and respiration of the terrestrial biosphere are roughly 120 Pg C. Therefore, the terrestrial biosphere’s productivity has increased by only 1.7%-2.5% in response to a 45% increase in atmospheric CO2. From these quantitative terms, we can infer that the coupling between atmospheric CO2 and the biosphere’s carbon uptake is weak. This contradicts the Gaia Hypothesis’ theory that life, through homeostasis, will regulate Earth’s processes to conditions optimum for its survival. The Gaia Hypothesis also suggests that terrestrial life would increase its rates of carbon absorption much more than the ocean would. But, available data shows that the ocean and terrestrial biosphere are equally insensitive to carbon dioxide concentrations in the atmosphere.

Science is a process. It’s a journey toward an improved collective understanding. It is not a contest where someone will declare a winner and a loser. It should not matter who ‘wins’ the Gaia Hypothesis debate’. What really matters is that the scientific community as a whole keeps moving forward toward a better understanding of how Earth’s systems function.

According to James W. Kirchner from the University of California, we must remember that theories are nothing more than conjectures. When we find data that contradicts those conjectures, we must see them plainly for the refutations that they are. Often, our first instinct is to rescue theories by denying data. But, in the long run, accepting fact-based data is the only way forward.

The scientific community has made considerable progress toward unraveling the complexities of our Earth. But what we still don’t know dwarfs what we know. The Gaia theory is undoubtedly not a verity – no one has proved it is true. But it is certainly not a conjecture either. Lovelock developed the Gaia Hypothesis based on actual facts and observations. Only more research that leads to a better understanding of our home will tell us if what Lovelock proposed is the truth or not.

But for now, let us all agree that Earth is our shared and collective home. Our impact on the Earth’s environment, climate, and atmosphere are growing daily. We need to understand the consequences of our activities on biota and ecologies. We also need to know how to react without causing further damage. Let us go forward with dedication, skill, and insight.