Canada battles heat waves as British Columbia marked the first day of summer with record-breaking temperatures. According to weather experts, the temperatures in June marked the most deadly weather event in Canada’s history. They also said they hope the summer Canada witnessed is a one-in-a-thousand-year event.

The scorching heat wave that hit Canada in June was the most extreme summer heatwave in North American record. Temperatures in the country reached 20oC above the average June temperatures. The heatwave scorched the entire North American continent’s northwest region before slowly subsiding. About a 100 wildfires developed in the western part of Canada, especially British Columbia. British Columbia alone recorded around 177 active wildfires. Canada had its military on standby to evacuate towns threatened by the fires.

The fires were so strong that their plumes created thunderstorms. Lightning from the thunderstorms sparked more forest fires.

Canada recorded 570 deaths related to the heat wave. There were thousands more than ended up in the emergency wards of hospitals overwhelmed by the high temperatures. Weather conditions were tinder-dry in the country. The government, based in Ottawa, warned Canadian citizens that the summer ahead would be long and challenging. In Vancouver, 65 people died from the heat.

The National Oceanic and Atmospheric Administration (NOAA) found that the heatwave wouldn’t have occurred without human-induced climate change. Even the US states of Oregon and Washington recorded temperatures far above 40oC. Oregon recorded about 100 deaths due to the extreme heat. According to research, prolonged heat events between now and 2050 are two to seven times more likely. This prediction is based on the scenario where greenhouse gas emissions continue at the same pace as today. There is a chance that we might be able to avoid these weather events, but for that, we need to stop being so dependent on fossil fuels.

The country’s weather scientists blamed a high-pressure heat dome for the rise in average temperatures. However, they also said that climate change is making high temperatures more frequent.

Climate change will increase the frequency of heat waves in the country. However, experts say that they cannot specifically link heat waves to global warming. But they also said that thunderstorms could spark wildfires as weather patterns change due to increasing global temperatures. 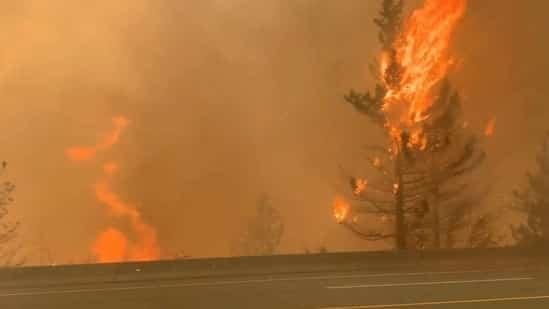 Researchers say that if humans hadn’t heated up the Earth so much, heat waves in the country would be 150 times less likely to occur. They arrived at this conclusion by comparing today’s climate with what it would be like without human-induced global warming and used 21 climate models. They raised concerns that global warming, from burning enormous amounts of fossil fuels, is heating up the planet much faster than models predict.

Researchers working on the climate have now grown used to observing record-breaking heat waves all across the world in recent years. However, breaking all previous records by more than 4oC in one single event, as in Canada, is virtually unprecedented. Researchers say that in a world without human-induced climate change and global warming, the Earth would be 1.2oC cooler. This means that extreme heat events, like the heatwaves, would also be around 2oC cooler in the past.

Canada’s previous national high-temperature record was 45oC. But, as mentioned earlier in the article, temperatures in the village of Lytton, British Columbia, broke this record, reaching 49.6oC. Without greenhouse gas emissions, the heatwaves would just not occur. The statistics of heatwaves occurring in a world without greenhouse gas emissions is once in a million years.

According to research, if the Earth gets warmer by 2oC, Canada could experience devastating heat waves like last year’s every 5-10 years. There are very high chances that we could reach 2oC of warming in the next 20 years. Researchers say that Canada’s temperatures during the heatwave were so extreme that they lie beyond historical observations. This makes it difficult to quantify with complete confidence how rare Canada’s heatwave really was.

Scientists say that there may be two reasons for the rise in temperatures seen in the country. The first could be that the heatwave, made worse by climate change, was an extremely rare event. It could be the statistical equivalent of just really bad luck for the country. The second possibility is that the climate must have crossed a threshold or limit. If it did, that means the frequency of heat waves could increase.

Researchers have observed a gradual increase in the occurrence of extreme heat events as climate change and global warming progress. But what has happened in Canada has completely shaken them. Canada’s heatwave makes them believe that climate models have seriously underestimated the extreme weather events waiting for the world.

Scientists are worried that with climate change, heat waves like Canada’s could occur all around the world. They’ve stressed that our societies need to become more resilient to be able to adapt to the changing climate. The other important message is how urgently we need to reduce our greenhouse gas emissions. As climate change progresses, economies, societies, and communities worldwide will fall apart. The environment has taken enough damage. Countries must accelerate toward achieving their climate targets.