Biomolecules, sometimes called biological molecule or molecule of life, is one of the many chemicals produced by cells and living organisms. Biomolecules occur in various forms and sizes, and they perform several functions. Biomolecules are divided into four categories: carbohydrates, proteins, lipids, and nucleic acids.

Carbohydrates – Sugars and their Derivatives

A carbohydrate is a biomolecule composed of carbon (C), oxygen (O) atoms, and hydrogen (H) in which a hydrogen-oxygen atom is in the ratio of 2:1. (as in water). As a result, the empirical formula Cm(H2O)n exists (where m may or may not be equal to n).

In biochemistry, carbohydrate is most often used as a synonym for saccharide, which relates to sugars, starch, and cellulose. Saccharides are divided into four chemical groups: monosaccharides, disaccharides, oligosaccharides, and polysaccharides.

Sugars, which are monosaccharides and disaccharides, are the smallest (lowest molecular weight) carbohydrates.

Carbohydrates are very essential for nutrition and may be found in a wide range of natural and processed meals. A polysaccharide is a starch. It may be found in large quantities in grains (wheat, maize, rice).

Amino acids are chemical molecules having amino and carboxylate functional groups as well as a side chain (R group) that is unique to each amino acid. As of 2020, more than 500 naturally occurring amino acids have been identified as monomer components of peptides, including proteins.

Amino acid residues, in the form of proteins, are the second-biggest component of human muscles and other tissues (water being the largest). Amino acids are involved in a variety of functions, including neurotransmitter transport and biosynthesis, in addition to their role as protein residues.

The sequence of amino acids that make up a protein’s primary structure is referred to as the protein’s main structure. This sequence is determined by the individual’s genetic makeup. It regulates the order of side-chain groups along a linear polypeptide’s “backbone.”

A protein can include up to 20 different amino acids, and the order in which they appear is critical in determining the protein’s structure and function. Proteins play a crucial role in the structure of cells. They can also act as transporters.

Nutrients and other chemicals are transported into and out of cells, and enzymes and catalysts are responsible for the vast majority of chemical reactions in living organisms. Proteins have a role in the production of antibodies and hormones, as well as the control of gene activity.

Most lipids are amphiphilic because they have a polar or hydrophilic head (usually glycerol) and one to three nonpolar or hydrophobic fatty acid tails.

Biological fatty acids, belonging to the carboxylic acid class. These are made up of a hydrocarbon chain having one carboxyl group (COOH) at the end.

Saturated fatty acids (SFAs) are a kind of fatty acid. Unbranched, linear chains of CH2 groups connected by carbon-carbon single bonds. Also, one terminal carboxylic acid group attached are the simplest fatty acids. The term saturated fatty acids denote that each carbon atom in the chain has the maximum number of hydrogen atoms linked to it.

Several shorter-chain fatty acids are biochemically significant. Even though their chains are generally between 14 and 24 carbons long. Glycerol is a sweet-tasting, clear, colorless liquid that belongs to the alcohol family of chemical substances. Glycerides are lipids that have a glycerol backbone.

Glycerol is found in triglycerides, which are glycerol esters with long-chain carboxylic acids, and is derived from plant and animal sources.

In the liver and adipose tissue, glycerol serves as a precursor for the production of triacylglycerols and phospholipids. Glycerol and fatty acids are released into the circulation as the body consumes stored fat for energy. Glycerol is mostly broken down in the liver.

It’s commonly utilized in FDA-approved wound and burn treatments because of its antibacterial and antiviral characteristics.

The most frequent form of fat in the body is triglycerides. They store whatever extra energy you eat. A high triglyceride level in combination with high LDL (bad) cholesterol or low HDL (good) cholesterol is connected to fatty build-ups inside the artery walls, increasing the risk of heart attack and stroke.

Nucleic acids are formed by nucleotides. These nucleotides are fundamental building blocks. Long chains of nucleotides make up natural polymers, RNA, and DNA. A sugar molecule (ribose in RNA or deoxyribose in DNA) is bonded to a phosphate group and a nitrogen-containing base to form a nucleotide. Adenine (A), cytosine (C), guanine (G), and thymine (T) are the four bases utilized in DNA. The nucleotide uracil (U) replaces thymine in RNA.

The units and substances that are linked together to produce nucleic acids, most notably RNA and DNA, are known as nucleotides. Both of these are long strings of nucleotides that repeat. In DNA, there are four nucleotides: A, C, G, and T; in RNA, the same three nucleotides are present, but the T is substituted with uracil.

The nucleotide is the fundamental building component of these molecules, and it is essentially created one at a time by the cell and then strung together by the process of replication (in the form of DNA) or transcription (in the case of RNA). Many substances are made up of macromolecular units, including physiologically essential proteins and nucleic acids. Insulin is a protein hormone that regulates blood sugar levels and is produced in the pancreas. Its molecular unit is made up of 51 amino acids. Insulin from animals has been discovered to have a molecular weight of 5,734.

Enzymes are also known as biocatalysts. They are biological catalysts that help live organisms speed up biochemical reactions. They may be isolated from cells and employed to catalyze a variety of commercially relevant activities.

The term “enzyme” was coined in 1878 by German scientist Wilhelm Kühne to describe yeast’s capacity to make alcohol from carbohydrates, and it is derived from the Greek words en (meaning “inside”) and zume (meaning “yeast”).

There is an “active site” for each enzyme. This place is unusually shaped. A substrate is a material on which an enzyme operates. The substrate has a distinct form as well. To operate, the enzyme and the substrate must be compatible.

Enzymes only need to be present in very little amounts to serve as catalysts, and they can speed up processes without being eaten. Enzymes are typically described as being able to catalyze the transformation of substrate molecules into product molecules in the following way:

The huge catalytic activity of enzymes is likely best indicated by a constant, Kcat, which is also known as the turnover rate, turnover number, or turnover frequency. This constant denotes the number of substrate molecules that a single enzyme molecule may convert to the product in a given amount of time (usually per minute or per second).

Enzymes require specific conditions to function properly. Enzymes can alter form if the circumstances aren’t appropriate. They change the form and do not fit with substrates thus not functioning properly. Temperature and pH are appropriate for each enzyme.

Although enzymes are mostly made up of protein, many additionally contain a non-protein component known as a cofactor. A cofactor is required for the catalytic activity of the enzyme. A cofactor can be an organic molecule (coenzyme) or an inorganic molecule (metal ion) such as iron, manganese, cobalt, copper, or zinc.

Minerals and vitamins are required in the human diet because of their activities as cofactors and coenzymes in metabolism. 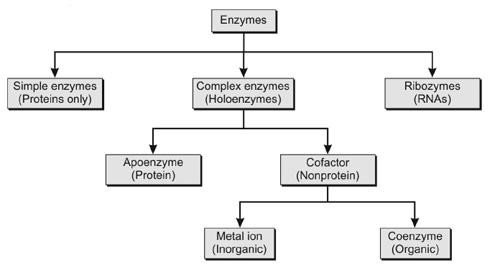 Lipids and Biomembranes – The Barriers

Biological membranes are generally made of lipids and act as barriers for cells. They isolate the cell from its around components and divide the cell’s interior into compartments. The lipid bilayer structure provides the foundation for biological membrane compartmentalization by forming an impermeable barrier for important water-soluble components in the cell.

The hydrophilic (polar) and hydrophobic (nonpolar) are located differently in a cell molecule. As a result, membrane lipid components are organized in what is known as a continuous bimolecular leaflet, or bilayer. The polar sections of the component molecules are found on the bilayer’s two sides, while the nonpolar portions are found in the bilayer’s interior. Membrane lipids create a bilayer that acts as a live cell’s containment unit. Membrane lipids also serve as a matrix for membrane proteins. Traditionally, lipids were assumed to only have a structural function. Lipids have a wide range of functions: They have a role in cell growth and adhesion regulation. They help to make other biomolecules through biosynthesis. They can help enzymes boost their enzymatic activity.

Monogalactosyl diglyceride (MGDG), a non-bilayer forming lipid, dominates the bulk lipids in thylakoid membranes. They generate a reverse hexagonal cylindrical phase when hydrated alone. They create lipid bilayers when combined with other lipids.