Biodiversity is the term used to describe the diversity of life on Earth. The term encompasses all living levels on Earth, including genes, ecosystems, wildlife, and the ecological, social, cultural, and evolutionary processes that support life on Earth. Biodiversity conservation is the protection and preservation of the variety of life on Earth, including the diversity of species, ecosystems, and genetic variation. This is important because biodiversity plays a critical role in maintaining the health and functioning of the planet, providing essential services such as pollination, pest control, and climate regulation.

Biodiversity conservation can take many forms, including protecting and managing natural habitats, reintroducing endangered species, and reducing human activities that harm biodiversity, such as pollution and over-exploitation of resources. Some international agreements and bodies, such as the Convention on Biological Diversity, the United Nations Framework Convention on Climate Change, and the International Union for Conservation of Nature, have been established to address biodiversity conservation on a global scale.

Biodiversity is a broad term, including rare, endangered, or threatened species and every living species, from human beings to the tiniest organisms like fungi, invertebrates, and microbes. The natural world depends heavily on various species to maintain its health and balance. The biodiversity on Earth is fundamental to keeping the environment stable. The variety of organisms secures ecological resilience while enriching and sustaining life on Earth. We may not realize it, but biodiversity plays a vital role in our lives. Humans value biodiversity for numerous reasons, some intrinsic and some practical. Utilitarian values include the several essential requirements humans receive from the environment, such as fuel, shelter, food, herbs, medicines, and other resources. Moreover, biodiversity provides critical services such as regulation of the climate, purification of water, dispersal of seeds, pollination, control of pests, and nutrient cycling. The world’s biodiversity holds value for further benefits that are not yet recognized, like new healing properties and other unknown services. Biodiversity has immense cultural, spiritual, and religious significance to humans.

The intrinsic value of biodiversity includes its inherent worth. This value is more of a philosophical notion. Humans can understand the value of biodiversity through the relationships and connections we form with each other and the whole of nature. The number of values placed on biodiversity is crucial as they can influence the protection and conservation decisions humans make every day.

What is Biodiversity Conservation?

Conservation of biodiversity refers to preserving, protecting, managing, and uplifting the world’s biodiversity to obtain sustainable benefits for the present and future populations. Biodiversity conservation has three primary goals. They include protecting and preserving species diversity, sustainably utilizing ecosystems and species, and maintaining critical ecological processes and life-supporting systems.

The International Union for Conservation of Nature (IUCN) has put together a comprehensive list of ‘knowledge products’ that permits monitoring the environment’s state. The list also includes the IUCN Red List of Threatened Species, the IUCN Red List of Ecosystems, and the IUCN Green List of Conserved and Protected Areas. The monitoring system examines the extinction risk of organisms and the risk of ecosystem destruction and provides a practice standard for protected areas. This wide range of knowledge products is used to assist and direct conservation efforts, policy-making processes, and decision-making related to the conservation of the environment.

The European Biodiversity Conservation Team, located in Brussels, is a part of the IUCN Global Species Programme. The program mainly focuses on the protection of biodiversity and on strengthening protected management areas all over Europe. The European Biodiversity Conservation Team works on a wide range of problems. Local strategies and procedures like the EU Biodiversity Strategy guides and directs the team. These strategies aid the team in preserving and protecting Europe’s ecosystems, habitats, and biodiversity. The team can do this by increasing the understanding of the environment and species through assembling, transferring, and generating scientific and technical knowledge about species and their ecosystems- through the application of IUCN knowledge products, and the mission is made possible.

In-situ biodiversity conservation includes protecting and conserving species and organisms within their natural territory. This method has numerous benefits, such as it can be used as a suitable and cost-effective method of preservation. A vast number of species and organisms can be conserved and protected simultaneously. As the organisms are already in their natural habitat, they will be able to grow and evolve better and adapt to various environmental conditions. 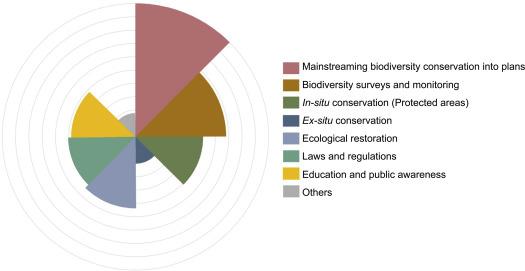 Ex-situ biodiversity conservation includes the process of maintaining and breeding endangered and threatened species outside their natural habitat. The process occurs by placing the species in an artificial habitat or ecosystems like botanical gardens, zoos, and nurseries. In artificial environments such as these, animals have less competition for water, food, territory, and other resources. Ex-situ conservation provides the animals with a longer life span and breeding activity. The people in charge can release the animals bred in artificial habitats into their natural environments. Researchers can utilize genetic techniques for the conservation of endangered animals.

The following are essential strategies for the conservation of biodiversity: