10 Cities That Are Running Out Of Water Climate change is predicted to contribute to increasing urbanization. Extreme weather conditions in rural areas will force thousands of people to migrate into urban areas. According to the International Organization for Migration, around 70 percent of Dhaka’s (capital of Bangladesh) slum dwellers migrated into the city to escape severe environmental shocks.

Climate change impacts in cities will rapidly increase as more people move into them. One of the impacts currently taking place in cities is the problem of water shortage. According to a 2020 report by the World Wide Fund for Nature (WWF), approximately 30 cities in India will face a severe water risk crisis by 2050 due to the rapid increase in the city’s population.

Without international efforts to cut greenhouse gas emissions, increasing city populations will stress the world’s water resources. In the coming years, several of the world’s major cities could face the prospect of running out of water, like the city of Santiago.

Importance of Water in Urban Areas

Only 3 percent of the water on earth is available for consumption purposes. Out of the 3 percent, only 0.01 percent of freshwater is easily accessible for human use in lakes, rivers, and reservoirs. During the 20th century, worldwide water consumption grew at more than twice the rate of population increase.

Water has shaped the prosperity and wealth of several nations and cities. Water is a crucial natural resource needed not only for domestic consumption and industrial uses but also for food and energy production and balancing environmental functions. Cities rely upon water availability for various urban functions like transportation and food supply.

Lack of clean water availability could pose several challenges. These include overexploitation of water resources to meet demands, serious healthcare problems, lack of efficient wastewater management, groundwater pollution due to the increased human waste disposed of in water bodies, etc. Numerous cities are already facing a decline in freshwater availability.

Below are ten cities that are running out of water today.

10 Cities Running Out of Water

London is likely to run out of water in the coming 25 years or so. According to a report by Christian Aid, rivers in Britain will slowly lose half of their water by 2050 due to growing migration into cities driven by climate change and its effects. Thames Water has estimated that a severe loss of water in London could cost the city’s economy approximately £330m per day.

London doesn’t receive much rainfall every year. The city is showered with just 620 millimeters of rainfall a year. Most of the rain received by London in winter and autumn gets soaked into the rocks below the city. British water companies in the city then extract the groundwater and utilize it during summer. Climate change is likely to increase the frequency of droughts in South-East England. An increasing population and frequent pipe bursts could further stress London’s aging water supply system.

In 2019, approximately 2 million residents of Harare were cut off from the water supply as the city witnessed a severe drought. Haft of the city’s residents had access to municipal water supply, while the other half had to depend upon open wells, streams, and boreholes. These polluted water sources could lead to outbreaks of diseases such as typhoid.

Harare receives water from four main dams; however, the dams run dry due to a lack of improvements in infrastructure and rising temperatures. Zimbabwe is currently facing several economic challenges, preventing authorities from investing in proper water treatment plants and facilities.

In 2018, the City Council of Cape Town released a shocking announcement. It was announced that the city had only 90 days left before completely running out of water. Thus, Drastic measures were taken by limiting household water use to just 50 liters per day. Fortunately, the city’s lakes and reservoirs were filled again during the winter rainfall.

Phoenix, the desert city in Arizona, usually pipes in water from the Colorado River, 200 miles away from the city. Prolonged and frequent droughts are common in the city. Thus, residents of Phoenix pump wells and other groundwater sources dry. Climate change will make situations worse for Phoenix as snowpacks shrink in the Rocky Mountains, decreasing the Colorado River’s water flow by 35 to 50 percent.

According to a 2021 report by the Centre for Water Policy, the water pumped is approximately 7,000 to 8,000 years old. If all the water is consumed, there won’t be another ice age to re-establish it.

New Delhi is the most water-stressed out of all the cities in India. The city is struggling to meet the water demands of its residents as increasing populations migrate into the city for a better life.

In March 2022, India witnessed its highest temperatures in 122 years, with rainfall running a quarter to a third below normal. New Delhi received only 0.01 inches of rain in March and April due to the heating climate instead of the usual rainfall of 1.14 inches.

Increasing urbanization, rising temperatures, and overuse of water for agriculture have put severe pressure on Beijing’s water supply. To supply the cities resident with water, the Chinese government in 2002 began constructing a massive system of canals to transport water from southern rivers to cities. 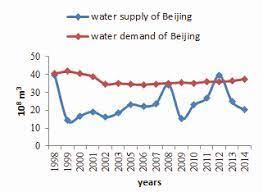 However, climate scientists are still concerned that the canal system may not be able to supply enough water to meet the city’s demands. As climate change intensifies, less rainfall over the Southern rivers will reduce the amount of water that Beijing will be able to take.

Sao Paulo was faced with a severe water shortage crisis when in 2015, the city’s 22 million residents had only 22 days left of running water. Experts have predicted that droughts in the city will worsen and increase in the future.

With a growing population, climate change, and mass planting of thirsty eucalyptus trees in the countryside, Sao Paulo could face severe future water shortages if actions are not taken to reduce the city’s water demand and explore sustainable water sources.

Egypt’s farmers and Cairo’s 21 million residents depend upon the Nile River to grow crops and drink water. The demand for water in agriculture, industries, and domestic consumption exceed the River Nile’s supply, forcing people to extract groundwater.

Climate change, rising temperatures, and rainfall decline during the wet season in Ethiopia could reduce the flow of water downstream in Egypt- producing water shortages. The water shortage crisis in Cairo is also damaging relationships with Ethiopia, Sudan, and other upstream countries that contest Egypt’s extraction from the Nile’s flow.

95 percent of Afghanistan’s population currently does not have sufficient food to eat due to the loss of crops driven by prolonged droughts. Thus, citizens migrate to the capital (Kabul) for a better life. However, Kabul is unable to provide residents safe and secure water supply.

About 85 percent of Kabul’s population relies on polluted shallow wells for water supply. However, as groundwater rapidly decreases, climate change will only worsen it. Afghanistan’s capital may not be able to provide residents with enough water to drink and food to eat if sustainable water sources are not found immediately.

A severe drought in Sydney between 2017 and 2020 reduced the amount of water in reservoirs that supply the city with most of its water. Due to irregular rainfall, droughts, rising temperatures, and water shortages, several leaders and water managers are concerned about whether enough is being done to keep taps running.